Void series new artwork of Union Flag – in honour of the red, white and blue!

Great Britain has a respect which far outweighs it’s size and you have to wonder why?

Patriotism is not something I consider often. But when I’m forced to I have to respect it! Whatever my views of cultural issues. There is something about these little islands and the people on them. A shared history and cultural journey which has brought us to the here and now!

Many countries are over the top in their patriotic fervour – America comes to mind immediately! Us Brits are a lot more reserved about such things, “Stiff upper lip and all that. Mustn’t be too showy, that won’t do at all” – guttural , throaty Sergeant Major cough!

But don’t confuse our lack of show with lack of pride! Our flag tells a story. A story of centuries of division which led to unity. The Union flag evolved as the separate countries of England, Scotland and Ireland combined. Wales is part of this union but is not represented on the flag. Such a shame as a Red Dragon would really add something to the design. Made up as it is of the combined flags of St Andrew, St. Patrick and St George. Might have to play with that idea!

And so, I come to one of my latest abstracts based around the Union Flag. 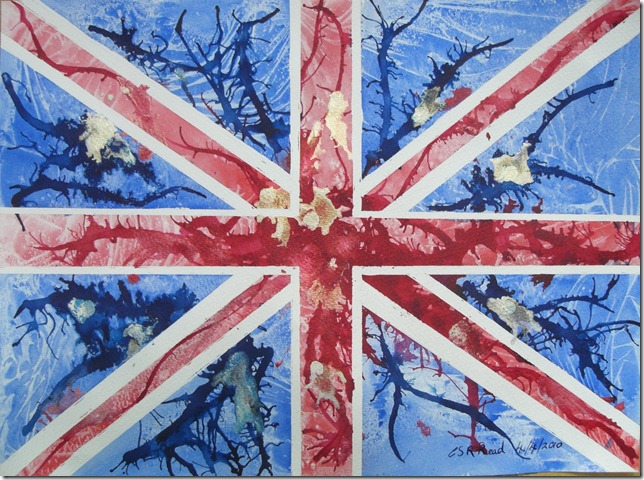 Hence the title  “The Heart of a Nation.”

Artist creating abstract art using mixed media. I believe there should be beauty in art, but sometimes it takes an artist to show others what is truly beautiful.
View all posts by CathyReadArt →
This entry was posted in Acrylics, watercolour and tagged blue, flag, red. Bookmark the permalink.

1 Response to Void series new artwork of Union Flag – in honour of the red, white and blue!